Přejít na hlavní obsah
Homepage > Rozvoj lokalit >
What should happen and why? What will change?

how much will it cost?

who will do the work?

the role of ipr prague

The aim of the competition was to find the optimal solution for a new cemetery department that will - through its function and expression - meet one basic condition, namely the dignified storage of cremated human remains. 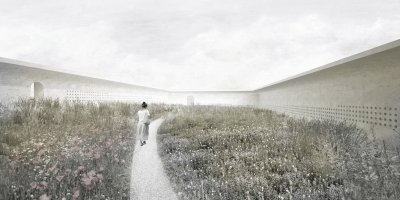 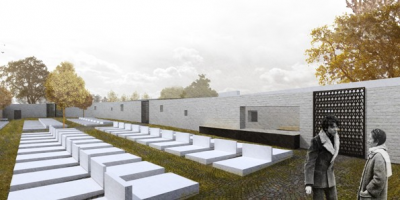 The jury appreciated the persuasiveness and purity of the architectural solution, which uses a minimum of elements, and the timelessness of the chosen concept. This creative approach to tradition adds refinement to a location that does not have a solid foundation today. Through its closed character, the design naturally follows the existing structure of the cemetery. The space is clearly defined through its surroundings and creates a strong, clearly-defined place for contemplation. The jury also positively assessed the innovative storage of urns, which will become part of the architecture of the location and, despite the frequency of storage, will not disturb the central meditative space in any way. The proposed solution for the central space has the potential to live and develop over time. It can function either as a scattering meadow or can gradually become a different space depending on the use of the cemetery. It will be necessary to examine an independent method for storing urns in the wall, and the material and technical execution. The proposed parking by the road is not realistic, yet the nature of the design allows it to be relocated. Text part Poster

The jury appreciates the natural way in which the landscape is integrated into the area. The open concept would allow for the necessary modifications and life over time. This is an example of landscape architecture characterized by its great impact. Rays protrude from the central path, in some area creating intimate places, elsewhere interconnected places. The design does not sufficiently reflect the presence of the relatively noisy road. The quiet landscape would be constantly impacted by it. However, this problem is solvable. The main shortcoming of this design is that during the implementation of the 1st phase, meaning a small part of the project, only the torso would remain of the whole. The proposed concept would remain unclear. The jury appreciates the idea of the chapel, even though it is located outside the area in question. It is a dominant feature that creates a natural node, a center of gravity and an entrance gateway. The design does not indicate which rite it would serve, yet introduces another important dimension to the solution. Text part Poster

The jury appreciates the overall conceptual approach and originality of the idea, which significantly differentiates the design from the others. Rather than being the target form of the cemetery, it provides a strategy for its gradual development. It is an open concept that will enable more forms of the cemetery in the future. It works convincingly with the modular system, whether in its basic raster or in a completely new revolutionary burial method. The capacity of the cemetery would be huge thanks to the use of modules. It thus offers an alternative to the original assignment, namely the possibility of setting up a central burial ground. However, it has not been sufficiently examined in urban and landscape terms. The proposal responds to the broader context of “Greater Prague” and the adjacent housing estates. As the space only uses a single burial system, there are concerns as to whether such a drastic change would be accepted and whether a solution with this scope would be viable from the users’ point of view. However, the modularity that is the strength of the design is also its weakness. A certain tendency towards schematicity and stereotypes could appear, which - with a higher density of modules - could erase the tragic uniqueness of each death. Text part Poster

This design works with the classic cemetery model with a regular grave structure. This model is also radically divided by a path - a route surrounded by walls that connects to today’s footpath passing through the entire site. This creates tension between the regular structure and the organic irregular shape. The solution allows for distinctive vistas and will create places that urge passers-by to stop for a while. At the same time, one cannot help but feel that this might only be a gesture. The estimated investment costs were underestimated by the authors of the design. Text part Poster