From the river to the roof: the winning design for the Vltava Philharmonic Hall by the Bjarke Ingels Group will be alive 24 hours a day, 7 days a week.

Prague has announced the winner of the international architectural competition for the design of the Vltava Philharmonic Hall: the winning team is headed up by the Danish studio Bjarke Ingels Group (BIG), headed by Bjarke Ingels and Brian Yang. The decision of the international jury was announced by the City of Prague together with the Prague Institute of Planning and Development (IPR Prague) during a gala evening at IPR Prague’s Center for Architecture and Metropolitan Planning (CAMP). The winning design for the modern music center, which will be built in Prague's Holešovice district, focuses not only on the building as such, but also provides imaginative solutions for the surrounding public space, envisages making the riverbank accessible, and opens up the Philharmonic Hall’s outdoor terraces, including the roof, to the public. 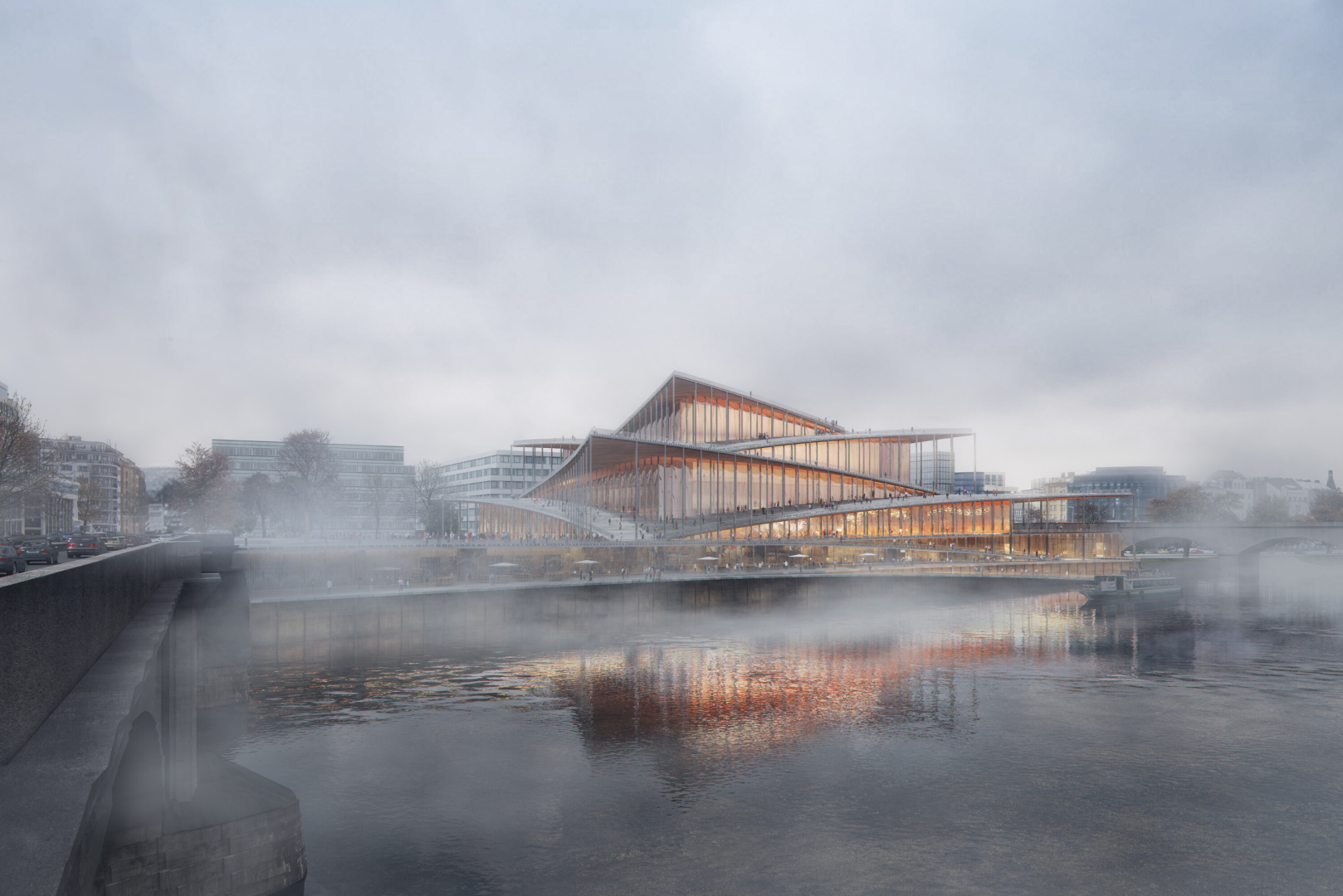 "Many factors had to be taken into account when selecting the winning design. The site for the philharmonic hall currently complicates rather than encourages gatherings, so the focus was not only on the architecture and operation of the building, but also on the design of the public spaces in the surrounding area. The Vltava Philharmonic Hall, as presented by the Danish studio BIG, will become a vibrant center of life in Vltavská - a new urban park will stretch eastwards from the building, the south side will open up access to the water, a square will be created on the west side, and to the north there will be a view of the new Bubny-Zatory district. The building itself will be accessible from all directions and levels," says Michal Sedláček, chairman of the competition jury.

The ambition of the Vltava Philharmonic Hall is to attract not only classical music fans, but also the general public. The winning design by BIG envisages the construction of three halls, as well as space to house the music department and creative hub of the Municipal Library in Prague. Visitors can look forward to a café or rooftop restaurant, and many will certainly take advantage of the educational activities on offer. The roof of the building is conceived as an extension of the public space of the square; the stepped form will allow visitors to climb to the top of the roof without having to enter the building, so everyone will be able to enjoy a unique panoramic view of the city.

"From the beginning, the winning design was my favorite, mainly because it comes up with something we don't have in Prague yet. The place will be alive from the river to the roof - the Philharmonic Hall's terraces will be publicly accessible directly from the adjacent square, so everyone will be able to enjoy the building, even those who are not fans of classical music. This architectural competition addressed three things at once. The area around the Vltavská metro station is currently a dismal place that is not very inviting to visit, and this will change. The new building will also attract a different type of tourist to Prague, who will come for culture and not just for cheap alcohol. Finally, our city needs modern architecture that will complement the work of our ancestors with great humility," says Prague Mayor Zdeněk Hřib.

"The Bjarke Ingels Group is currently the absolute world leader, but I was still surprised by what they were able to come up with. I am convinced that the building will immediately become an icon, a symbol of Prague. It is open to all, democratic, yet has a clear order. The authors have perfectly understood the place where they are putting the building, but they have come up with a completely new approach to public space for Prague. They make us think more about it and bring us closer to our river. I am looking forward to the BIG concert," adds Petr Hlaváček, First Deputy Mayor for Spatial Development and the Land Use Plan.

The Vltava Philharmonic will be home to two orchestras: the Prague Symphony Orchestra FOK and the Czech Philharmonic Orchestra. Both orchestras will find adequate residence space, but also facilities for expanding their educational programs for the public, which are an integral part of their activities. Music schools will also be able to use the Vltava Philharmonic Hall's premises for teaching. Representatives of the two orchestras, as well as the Prague Municipal Library, participated in the preparation of the architectural competition specifications and were invited to judge the competition, ensuring that the needs of each entity were included.

Ondřej Boháč, Director of IPR, adds, "It is also important that the new Vltava Philharmonic building will help kick-start the transformation of one of Prague's most important brownfield site, where the new Bubny-Zatory district should be created. This area is slated to become home to 25,000 residents in 11,000 apartments. One of the challenges the architects faced when designing the public space in the Vltavská area was to achieve a seamless connection between the Philharmonic building and the existing and future urban fabric. The winning design fulfils this perfectly."

The winning architectural studio, Bjarke Ingels Group, with offices in Copenhagen, London, New York, Barcelona, and Shenzhen, employs professionals including architects, designers, engineers, as well as theoreticians working in architecture, urbanism, research, and building development. Established in Copenhagen in 2005 under the direction of Danish architect Bjarke Ingels, many BIG designs are unique in their use of pioneering technologies and often stand out for their defiance of traditional conventions and dimensions, as in the case of Amager Bakke, a state-of-the-art waste incinerator in Copenhagen that doubles as a ski slope; the LEGO House in Billund, Denmark, which resembles the bricks of a famous building set; and the Méca (Maison de l'Économie Créative et de la Culture en Nouvelle-Aquitaine) in Bordeaux, France. The studio's portfolio also includes designs for residential buildings, museums and exhibition centers.

The international architectural competition for the design of the Vltava Philharmonic Hall was announced by the City of Prague and IPR Prague at the end of August 2021. 115 teams from 25 countries entered the competition, and five renowned architectural studios were invited to participate. In November 2021, the international jury announced the selected finalists, who submitted 19 competition proposals. The runners-up include Barozzi Veiga + Atelier M1, Bevk Perović Arhitekti, Petr Hajek Architects, and Snøhetta.

After confirmation of the results of the architectural competition by Prague’s City Council in June of this year, negotiations with the winner will be followed by the signing of a contract for the completion of the design, preparation of project documentation, and obtaining the necessary permits to start construction. The final stage should begin with the selection of a construction contractor in 2026. Construction work is expected to start in 2027, and the new concert hall should be completed in 10 years, i.e. in 2032.

From May 19th to June 30th, the winning design will be on display at an outdoor exhibition on the site of the future Vltava Philharmonic Hall. An information container was placed there until May 27th, where citizens were able to get answers to specific questions about the winning design and its immediate surroundings.

You can read more about the plans for the Vltava Philharmonic Hall here: www.vltavskafilharmonie.cz. 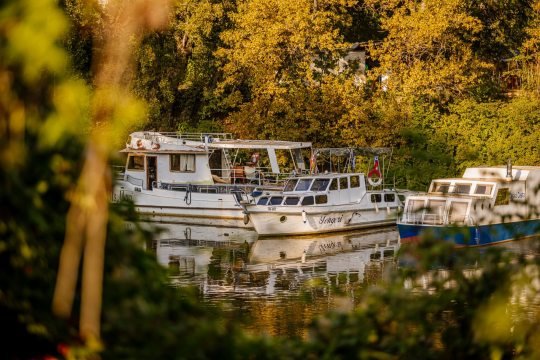 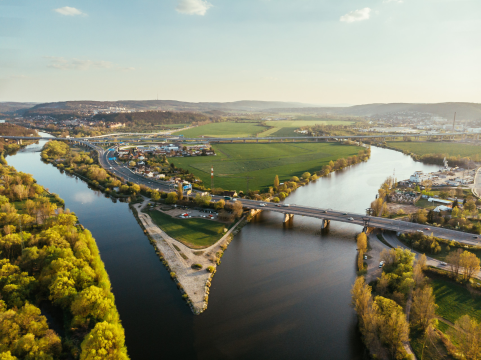 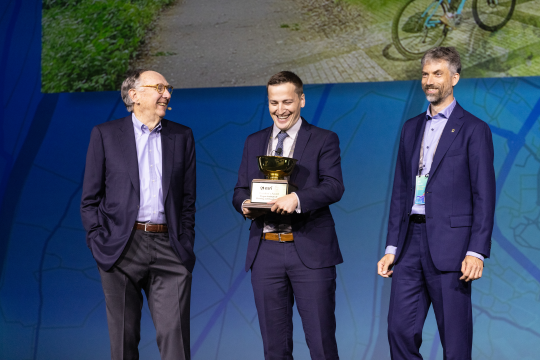