The unification of street furniture continues. Prague has a new design for transport shelters!

On November 30th, 2018, Prague selected a new design for transport shelters and railings to complement the benches, waste bins, and bikes stands whose design was selected earlier in the year. The authors of the winning transport shelter and railing design are Michal Froněk, Jan Němeček, Aleš Kachlík and Martin Klanica. The results of the so-called "negotiated procedure with publication" process coordinated by the Prague Institute of Planning and Development (IPR Prague) were approved by Prague City Hall in mid-November. The first prototypes will be installed in October 2019. 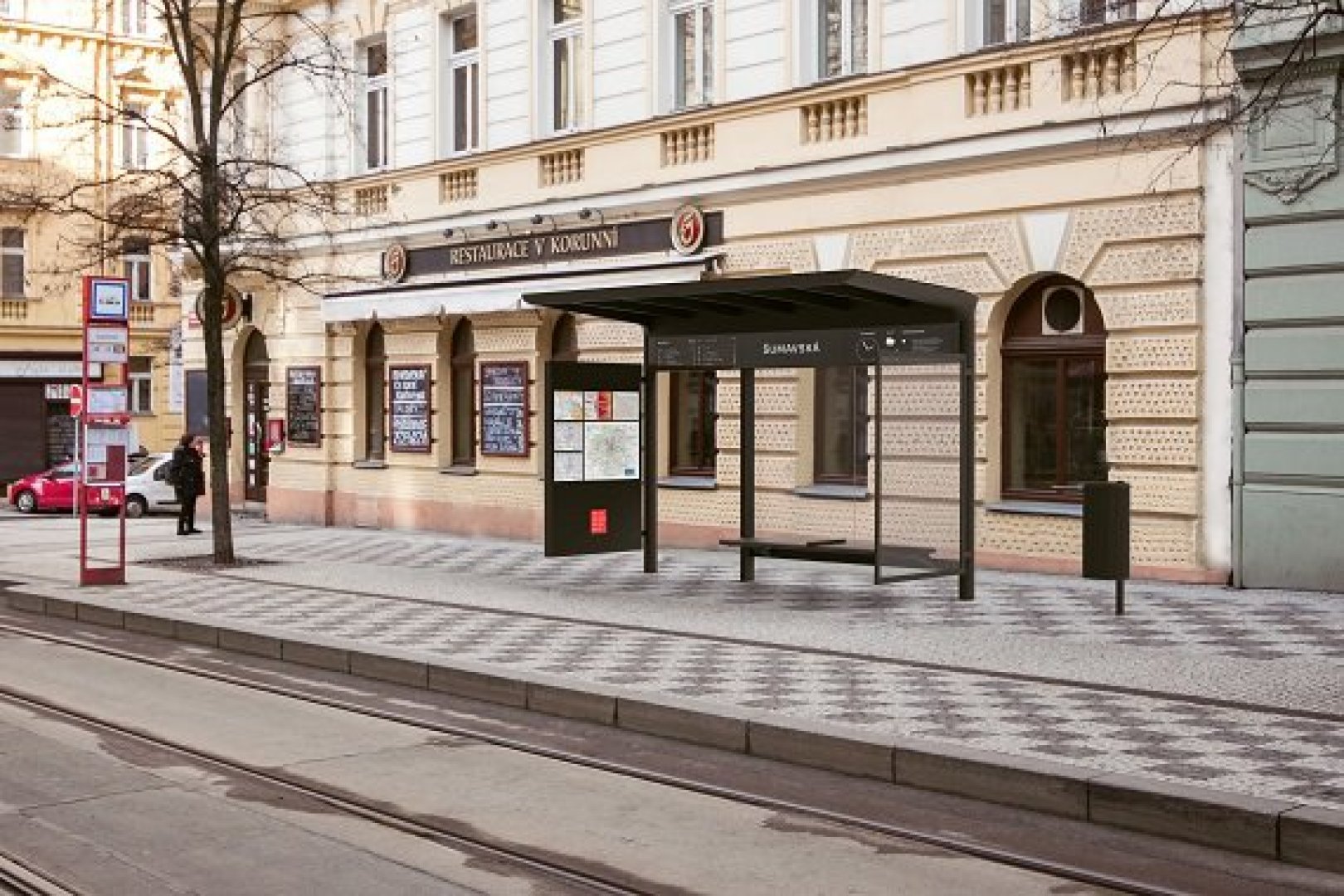 “We want a modern metropolis. Ordinary, but very visible items such as waste bins, benches and transport shelters are an integral part of a modern metropolis. Prague has historically spent a disproportionate amount of money on maintaining such items, and the winning design of the transit stop was also able to take this into account. I am pleased that these things are now really being handled professionally,” says City Councilor for Asset Management, Jan Chabr.

The task of the negotiation was to design a shelter that is functional, high-quality and attractive, with a universal and timeless design. The jury also considered the ease of maintenance and susceptibility to vandalism.

“We have selected an excellent design that will faithfully serve Prague for several decades to come. The authors, whose design was also selected for the benches, trash cans and bike stands, showed it is possible to combine function and elegance,” explains Ondřej Boháč, Director of IPR Prague.

The jury praised the winning design for its clean lines, variability, user comfort, and simplicity of production and maintenance. The new shelters will not only be an aesthetic improvement but will also significantly reduce operating and maintenance costs. The winning shelter is made of a dark grey powdered cast aluminum, and apart from one side intended for advertising, all other walls are transparent. Inside the shelter is an informational panel with the date and times of upcoming departures, the weather forecast, and the name of the stop.

An interesting element of the winning design is the walk-through rear wall of the shelter. According to the designers, this will facilitate access and movement within and around the shelter. The open rear wall prototype is one of a series of shelter variants that the authors proposed.

The authors of the winning design will now have time to complete design details and create a test prototype. Installation of the test prototype is planned for October 2019. After incorporating feedback from the testing stage, the authors will conclude a licensing agreement with Prague City Hall for the use of their design. The city will then announce a tender for a supplier.

The replacement of transport shelters will begin in 2021, when the city’s contract expires with the current supplier of transit shelters – JC Decaux. The first to be replaced will be those belonging to JC Decaux, or approximately 767 shelters, followed by those shelters in greatest disrepair.

What is a negotiated procedure with publication?
A negotiated procedure allows for direct communication and discussion of submitted proposals between the contracting authority, the evaluation committee, invited experts and competition participants, which is essential for achieving a quality design for technically more complicated elements such as transit stop shelters and railings.

The city does not have a unified look for its street furniture. Prague has over 70 different types of waste bins and 30 types of benches. Therefore, in September 2016, IPR Prague announced a design competition for the city benches, trash bins and bicycle stands. The main goal of this competition was to unify the look of the set and come up with a design that is representative and also functional. The authors of the winning design were Michal Froněk a Jan Němeček. The testing prototypes can already be found at several places in Prague. The next step after this competition was the search for a new design for transport shelters and railings.