On 8 February 2019, the Institute of Planning and Development (IPR Prague) unveiled a conceptual design for a new railway bridge at Výtoň, prepared by a team led by Prof. Roman Koucký. After many years of inadequate maintenance, the current bridge is in very poor condition. IPR’s task was to find a viable solution for the future. As well as expanding the bridge to three tracks, the conceptual design details overhauling the bridgeheads on both sides of the Vltava and a new stop at Výtoň. IPR Prague presented its plan to representatives of the Railway Infrastructure Administration, the city, preservationists and the public as part of its overall coordinated vision for Prague’s development. 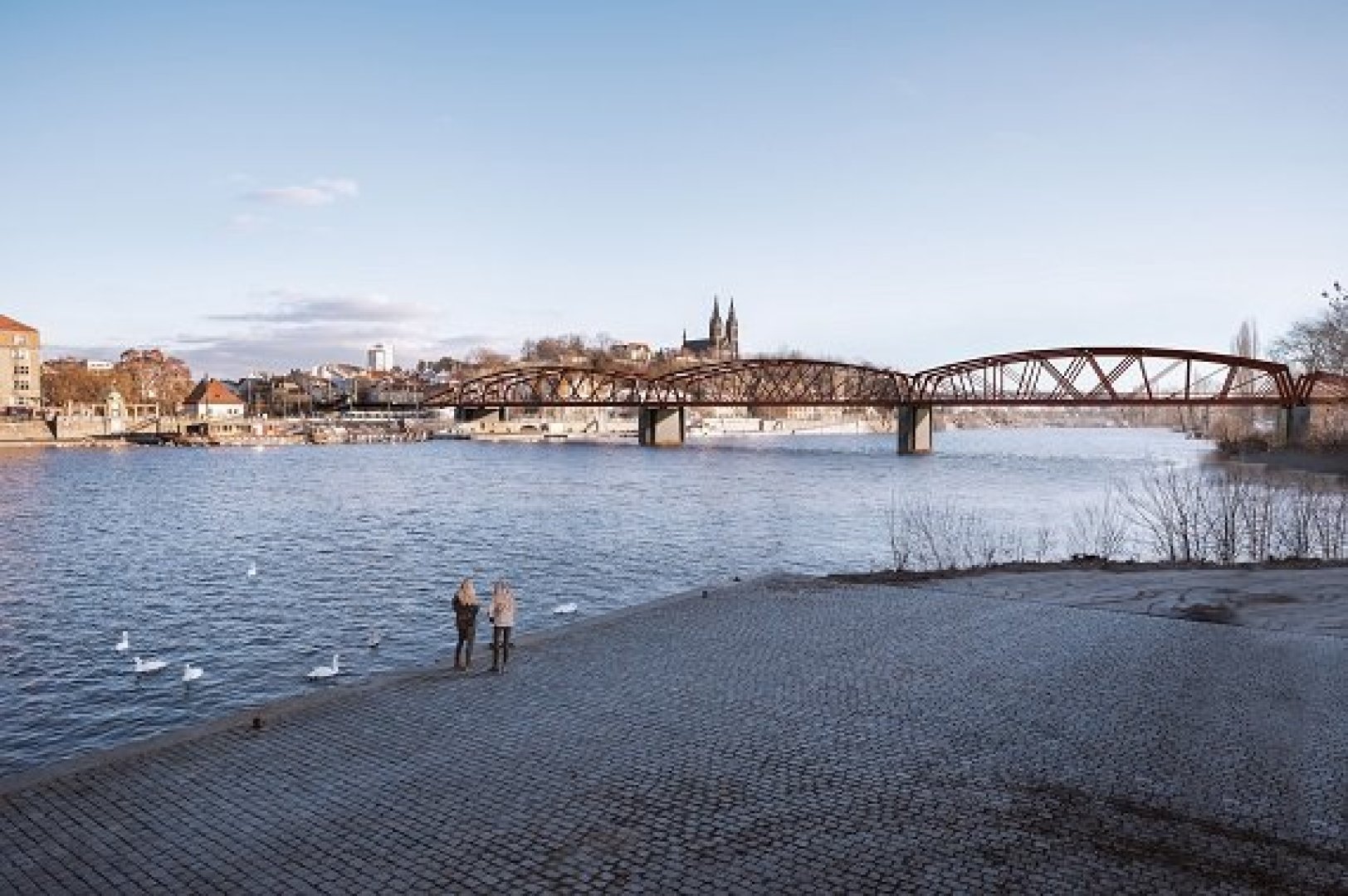 Mayor of Prague Zdeněk Hřib had the following to say about the railway bridge:“I’m glad we’re discussing the historic value of this bridge. We should look after the structure and not let it fall into disrepair. At the same time, railway operations in the city have to be maintained.”

“Repairing the railway bridge and its environs is one of our priorities. A three-track bridge on this line and new railway stop at Výtoň could significantly improve transportation in Prague,” said Deputy MayorPetr Hlaváček. “The bridge is in a dilapidated condition, and I’m pleased that IPR has taken a practical approach. They have also come up with a beautiful design. I will do everything I can to see that a constructive agreement is reached with the RIA and preservationists,” added Hlaváček.

“It’s important for Prague that an extra track be added to the bridge at Výtoň. This would increase capacity and allow us to build a new stop at Výtoň.We are aware of the cultural heritage of the current bridge, which is why we are looking at two options. If the bridge can be preserved, we will build another single-track bridge next to it. This will be determined by Professor Brühwiler from Switzerland, whom the RIA and I have invited to Prague at the end of February. If the bridge cannot be preserved, then we have a modern alternative that honours the legacy of the original bridge and also addresses both bridgehead areas,” said Deputy Mayor for Transport Adam Scheinherr.

The current double-track bridge consisting of three steel truss arches was built in 1901 and replaced the original single-track construction of five trapezoidal spans from 1871. At the time, the bridge was replaced despite a wave of public protest. Over time, the people of Prague came to accept the originally unpopular arched structure and later declared it a landmark. Construction of the new bridge, however, will not involve radical changes such as at the beginning of last century. The rare and still functional stone pillars will be retained, and secondary columns added. The ageing steel arches will be replaced with new structures.

Like the original, the new railway bridge will have three, simply laid sections spanning 71.2 m At their highest point the steel arches will reach 209 metres above sea level, like the current structure. For Prague residents, these three arches are indelibly etched into the Vyšehrad panorama. After examining numerous other design solutions, the team proposed paying homage to the iconic bridge and rendering it in contemporary architectural form. The bridge will have three main pillars. At the central pillar the bridge will divide into a double-track and a single track, with an interior walkway four metres wide to serve the railway stop.

“The final design was preceded by much discussion and several dead ends. We first analysed the position of the bridge and the possibility of making use of the existing structures. We concluded that the stone pillars should be used, but the steel structure had to be replaced,” explained design team head Roman Koucký. “We explored several options, including several structural analyses, ultimately adopting a design based on the current morphology of the bridge. It consists of a series of simple beams and retains the current silhouette. Yes, the same silhouette the public so vehemently protested against over one hundred years ago.”

Because of increasing operational demands, the new railway bridge will have three tracks. A combined spatial structure was selected—a truss beam network with two focal points at the apex of an equilateral triangle. This structure works much more efficiently with forces and mass. The proposed geometry of beams, rods and pipes offers Prague a new bridge that will meet the strictest aesthetic requirements, and yet be more than a mere likeness or copy. Recent examples of reconstructed railway bridges show that replicas are often deficient from a structural and especially aesthetic point of view. To meet certain standards, some of the old structures were changed, resulting in a loss of elegance.

The historical stone bridgeheads will be preserved and accordingly presented as landmarks. At the site of the stop, new reinforced concrete slabs for the platforms will be placed on a grid of concrete columns above the original elements of the viaduct. The historical structures below can then be restored and an archaeological survey of the arches performed. A new station hall will be built at street level of the Výtoň bridgehead, with a new and potentially interesting space for shops and cultural activities. A staircase and elevators will lead to the platforms.

The bed for tram lines will also be raised and the new Praha-Výtoň railway station will serve as a transfer point. Unfortunately, the Vyšehrad station cannot be used because it is too far away and would no longer meet current needs. Every year, passenger numbers are on the rise. The railway system is at the limits of its capacity, and without a third track the numbers of intercity and suburban trains nowneeded cannot be achieved.

The Podskalí area has historically been called Výtoň. Rafts coming down the river were taxed at the Customs House. Today, this is a popular public area and destination for pedestrians and cyclists and easily accessed by mass transit (including a ferry). The new railway stop would complement this recreational and cultural function. Because of the bridge, trains are an inseparable part of the area, and together with the Vltava River give the place an attractive old-time feel which is further characterized by the riverbank, quay, historic Customs House, waterfront restaurants and access to the Smíchov riverbank. In the future, both riverbanks should stretch southward to the planned Dvorecký tram bridge and should be residential and multi-level.

The railway stop and platforms will merge with the space in front of the station. A block of flats, which is yet to be completed, will be across the street. The overall modifications will create an attractive bridgehead area without car traffic and intersections and encourage new life over time. A radical change to and simplification of car traffic will create a compact oasis for Prague residents to meet and spend time.

This may refer to the clearance or gap between the station platform and trains. If it is too wide, then passenger safety could be compromised. It may also refer to accessibility for wheelchair users or accessibility generally, or even the width of the platform itself.