The draft study of the Ďáblice Estate is now ready to be discussed with citizens. The originally planned 14-floor buildings will not be built.

Two years ago, several new apartment buildings were planned for construction at the site of the unmanaged civic amenity buildings in the Ďáblice estate. However, this was met with a wave of opposition from local residents and the borough. The Prague Institute of Planning and Development (IPR) was therefore tasked with drawing up a zoning study aimed at preserving the identity of the housing estate, improving the public space, enhancing the quality of services and amenities and examining potential changes in the area. Local residents were involved in the planning process. In the autumn, architects collected resident opinions through a questionnaire survey and planning meetings to discuss the map. This evening, the first draft of the study will be presented to the public, after which it will have a whole month for commentary. 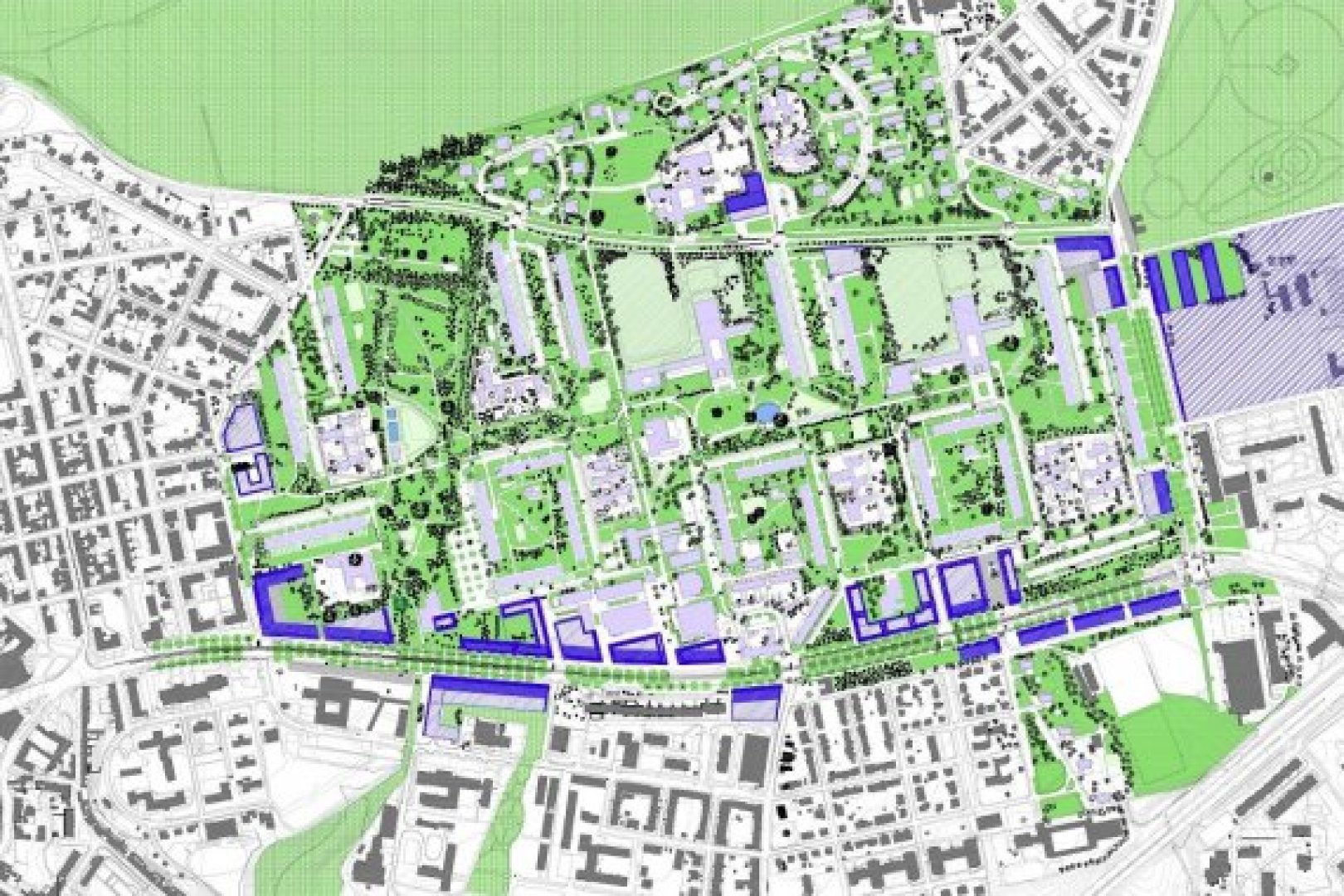 The Ďáblice housting estate is one of the best housing estates in the Czech Republic. It was built following elaborated plans drawn up by architect Viktor Tuček. It was erected in the 1960s, and unlike housing estates built later, included quality public spaces, cultural centres, playgrounds, an outdoor swimming pool, schools and attractive parks. Although the housing estate is now 50 years old, its quality is still undeniable compared to most of Prague’s other housing estates.

The new draft study by the MOBA architectural studio selected by IPR in a public tender strives to appropriately balance the needs of local residents with regard to other residents and the needs of Prague as a whole. The study fully anticipates preserving the original character of the estate, placing any new buildings mainly on Střelničná and Ďáblická streets, thus sensitively working with Viktor Tuček’s concept and fittingly complementing it.

“The Ďáblice estate has undeniable qualities that need to be protected. However, the needs of the city and the age and social structure of its residents have naturally changed in the 50 years of its existence. I believe that by maintaining communication with the local people, we will succeed in establishing the conditions for a high quality and especially liveable part of the city that will set an example to other housing estates,” said Deputy Mayor of Prague Petr Hlaváček.

The study does not include 14-floor buildings

The draft study divides the housing estate into two main parts—stabilized and transformative. The impact of the study on the stabilized part, which comprises the original concept, is absolutely minimal. It proposes adding allotments and front gardens, working with rainwater infiltration and adding pathways and pavements. The MOBA studio has even drawn up rules for how individual administrators should proceed in the area. No buildings are planned in this part, except for the reconstruction and completion of one or two floors.

In the transformative part, which comprises the zone around Střelničná and Ďáblická streets and the area in the north of the territory, the architects recommend sensitively adding low-rise buildings (up to six floors above ground). These should help to transform Střelničná into a classic city high street. The newly proposed buildings will provide the area with the necessary amenities, services and job opportunities for residents of the housing estate. Also proposed for the area are hybrid multi-level car parks with shops and cafés.

What were the outcomes?

In autumn 2018, joint meetings were held between the MOBA studio, the borough of Prague 8 and local residents. Many suggestions were raised at these meetings and have been incorporated into the analytical part of the study.

Last week, the draft zoning study was presented to the borough of Prague 8, representatives of housing cooperatives and owners’ associations, investors and municipal organisations. The commentary period will run from 11 March until 10 April, and anyone may make a suggestion or comment on the proposal. Meetings will also be held with investors, owners’ associations and cooperatives, politicians, officials and municipal organisations to discuss the details of the proposal. The aim of this one-month consultation is to reach an agreement on the subsequent plan in order to reflect a consensus, particularly between the needs of local residents and the strategic priorities of the City of Prague.

“Just to explain, the zoning study, unlike the zoning plan, is not binding and serves as a basis for decision-making in the area. In the case of Ďáblice, it outlines a vision for development up to 2060. We do not see the proposed construction works in the area as being a priority, but we would like to have the option to further develop the estate in the future, particularly with regard to the needs of young or ageing residents. As most of the new construction work is proposed for municipal land, any projects will be under our control. If necessary, we can add to them in the future, and if not, we don’t have to build. However, it is important that we can respond flexibly to the changing world and the city’s development,” explained Hlaváček.

“Communication with local residents and involving them in the planning process is a crucial part of creating the zoning study. We expect that comments will help improve the draft study and better adapt it to their suggestions,” said IPR Director Ondřej Boháč.

Results of the meetings can be found at www.iprpraha.cz/sidlistedablice (Czech only)