Prague city councillors have approved an updated plan to transform Wenceslas Square. The new plan calls for a tram line in the upper part of the square and a pedestrian promenade through the middle. The plan includes expanded sidewalks, a new line of trees, a separate lane for cyclists, and fewer parking spaces. The Prague Institute for Planning and Development (IPR Prague) helped update the design. 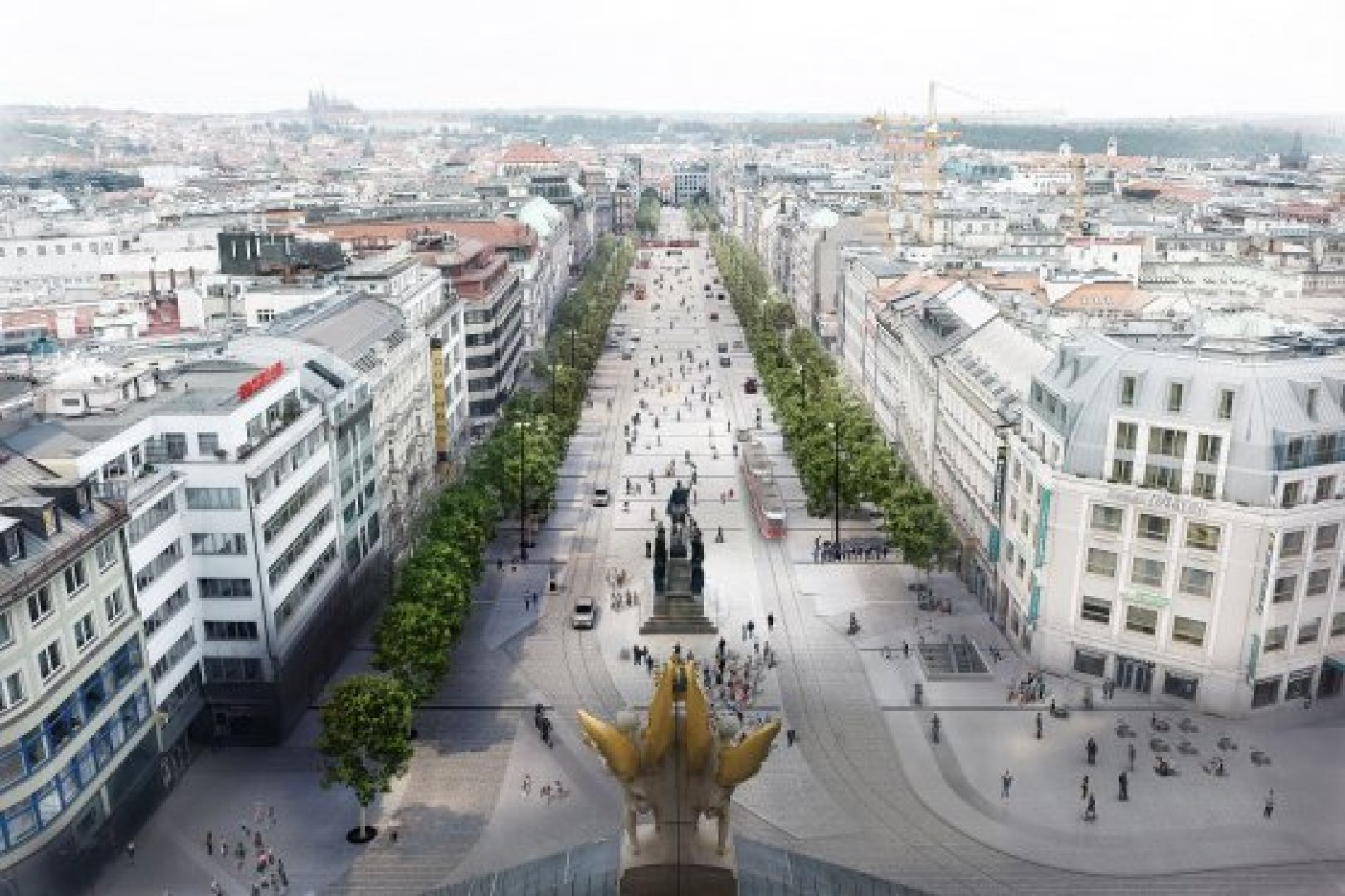 Prague’s plan to transform all of Wenceslas Square has been in place since 2005. The winning design, which was created in collaboration with the Cigler Marani Architects studio (today Jakub Cigler Architekti) and Atelier DUA, was the result of an urban design and architectural competition. The design for the upper part of the square has now been updated, and the project is much closer to being realized.

“We are giving Wenceslas Square back to the people, the way it was in the last century before it was overrun by taxi drivers, sausage stands and night club barkers. By moving the tram track, we can also create a beautiful pedestrian promenade through the middle of the square, which will finally become accessible to ordinary residents of the city. The new tram track will stabilize the Prague tram network significantly. An alternative track through the city’s centre will permit other tram lines to be developed on the city’s periphery,” said city councillor for transportation, Adam Scheinherr.

In the original design from 2005, the tram line ran through the centre of the square. However, the updated design has the tracks running where cars drive today. There will be two one-way tracks to minimize the space needed for transportation and leave more room for pedestrians.

No other major changes were made to the 2005 plan, and the spatial layout of the square is still based on the original winning design. The plan calls for fewer parking spaces, which will make it possible to significantly expand the sidewalks. A new avenue of trees, a pedestrian promenade, and a new cycling lane in each direction are among the other planned modifications of the upper part of Wenceslas Square. The proposed cycling lanes will connect existing cycling lanes between the historical and new National Museum buildings.

“Our priority is to ensure that the transformation of Wenceslas Square is not merely a project on paper. Changes to the lower part of the square will commence as soon as next spring. Our goal is to improve all of Prague’s major squares. After the Lesser Town, Charles, Victory and Marian Squares, it is finally Wenceslas Square’s turn,” said First Deputy Mayor Petr Hlaváček.

“For years, Wenceslas Square was paralyzed by complex relationships and overlapping projects. The previous administration of Prague 1 blocked the transformation of Wenceslas Square, whereas right from the start, we have wanted to reach an agreement with the city. We have now done that, and I am genuinely happy—we really owe it to the people. They deserve a new square,” said Mayor of Prague 1, Pavel Čižinský.

The Prague Public Transit Co. Inc. has already selected a general contractor for the documentation to build the tram line. The project manager will coordinate all steps with the authors of the updated plan for the square. Another step will be to hire the main project engineer, who will be responsible for the technical coordination of individual investors and their designers. The overall quality of the revitalization of the public space and the tram design will be supervised by IPR Prague on behalf of the city. The revitalization is expected to commence in 2022.

“I’m glad that after successfully renovating the area around the National Museum, we can now concentrate on the upper part of Wenceslas Square. I’m confident that the planned modifications will be appreciated by all visitors and residents of this significant area,” concluded the director of IPR Prague, Ondřej Boháč.