Prague is announcing an international Competitive Dialogue Procurement Procedure, seeking multidisciplinary international teams to define the future development of the area on the left bank of the Vltava River. The 56-hectare area of Rohan and Libeň Island is to undergo a gradual transformation, which will include the creation of a floodplain park on the river and the restoration of the now defunct island that remains part of the name of the area. The site is one of the most dynamically developing areas of the metropolis, for example, the Vltava Philharmonic Hall will be built on the opposite bank of the river. 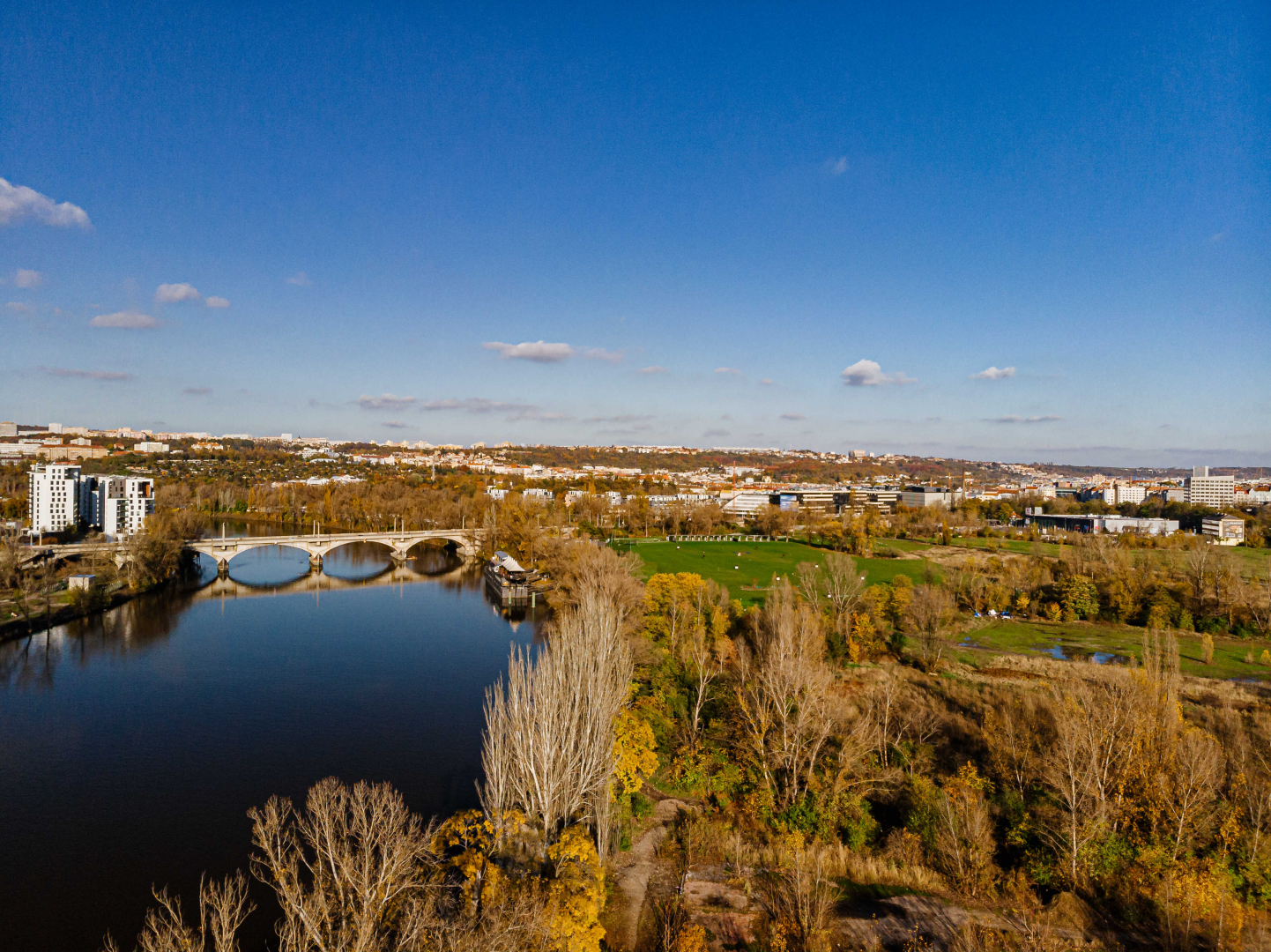 The Prague Institute of Planning and Development, which is the main conceptual workplace of the Czech metropolis in the field of architecture, urban planning, development, creation and administration of the city, and the City of Prague announce a procurement procedure in the form of a competitive dialogue. A multidisciplinary team consisting of landscape architects, architects or urban designers and water engineers is being sought to develop an area of 56 hectares along the Prague meander, which used to be an island. The aim of the project is to prepare a Rohan and Libeň Island Concept Plan, i.e. a strategic development plan for the upcoming decades, and above all to prepare a detailed landscape design of the Maniny Park. The aim of the new floodpain park is to bring people closer to the river while serving also as flood protection. Applications are open until Friday 20 May 2022 at 14.00 CEST via the Tender Arena tool at this link.

“Our city is developing at a record pace. Last year, nearly 10,000 new apartments received building permits, a record since 1989. However, residential development must also be accompanied by green spaces, and the importance of parks and trees in the city is constantly increasing, also as a result of climate change on our planet. We have planted almost 500,000 new trees during this election term. A new landscape design of Maniny Park will determine how many more will be added," says Mayor of Prague Zdeněk Hřib.

About the area of the Prague meander

The wider center of the Czech metropolis and the Prague meander have been undergoing a dynamic transformation in recent years. The Karlín and Libeň districts, which are directly affected by the project, are currently among the fastest developing areas in Prague. Originally working-class neighborhoods, which were hit by very devastating floods in 2002, they are now among the most desirable locations, but have also become a symbol of Prague's gentrification. Over the last 20 years, massive construction of office buildings and apartments has taken and continues to take place here. "Rohan Island is the last major development area in the city where a new large-scale park and natural feature can be created close to the city centre, and at the same time we have the opportunity to implement flood protection measures. There is a need to connect the public spaces in the area into a functional network and improve it, linking the new development to the original historic quarter and connecting it to the river. The main aim of the new park is to bring people closer to the river. The Maniny Park should be flood resilient and at the same time offer the residents of Prague a new place for recreation and relaxation," says Petr Hlubuček, Deputy Mayor for the Environment. The competitive dialogue concerns an area of 56 hectares along the Vltava River, the vast majority of which is unbuildable. Future development should respect the history of the site, build on its character and reflect the wild features of the local landscape. The area was originally an island, which disappeared after the regulation of the Vltava River flow in the 1920s. The island, though in a different location, will be restored with the creation of Maniny Park. The site of Rohan and Libeň Island is home to many communities and stakeholders ranging from cultural associations to sports organizations, gardening colonies, the local concrete plant and the Libeň harbor. In 2021, a series of participatory activities with the professional and general public took place, the results of which are available on the project website.

"The Rohan and Libeň Island project is the third large-scale green project on the river led by IPR Prague. Work is already underway on the Troja Basin and Soutok and many other projects along the Vltava. The Vltava Philharmonic Hall will be built on the opposite bank of the river, for which an international architectural competition is underway," Ondřej Boháč, director of IPR Prague, puts the project in context. The exceptional cubist Libeň Bridge is located in the area, the reconstruction of which is being prepared, and which will be followed by an inundation bridge offering not only improvement of the situation during floods, but also barrier-free access directly to the Maniny Park area.

Maniny Park is a project to create a new arm of the river; a new flow channel will be created at the site by digging up several meters of soil deposited over the last decades. This flood protection measure has long been included in the Zoning Plan of the City of Prague. Since 2008, it has obtained a zoning decision and one part even a building permit. "The current design of the park corresponds to the time of its creation, so it needs to be updated and a new landscape design for a floodplain park on the river needs to be proposed. It will restore the existence of the extinct island, though the Rohan island will be located in a different place." Petr Hlaváček, First Deputy Mayor for Spatial Development, introduces the project. The subject of the competitive dialogue is therefore the form and management of this newly created park with a new river arm. However, the park needs to be set in a broader context, which is why the tender also includes the creation of the Rohan and Libeň Island Concept Plan. This is expected to create a strategic development plan for the upcoming decades, which will address the development of the landscape along the river. The area concerned is primarily unbuildable, with a small exception where the urban design of the plot will have to be addressed. The aim of the project is to link the theme of the city center landscape with flood protection. We are looking for a solution that will be innovative, sustainable and contribute to improving the environment in the center of Prague. In order for the participants of the competition dialogue to understand the complexity of the area, IPR Prague has commissioned historical, natural, social, biological, dendrological research that will be provided to the selected teams and a Summary Analysis of Rohan Island is part of the procurement documentation available to the public.

Multidisciplinary teams with at least a landscape architect, an architect or an urban designer and a water engineer can enter the competitive dialogue procedure.The team must have at least one member who is authorized by the czech chambers (ČKA or ČKAIT). Candidates may apply to the competitive dialogue procedure from Friday 8 April to Friday 20 May 2022 at 14.00 CEST via the Tender Arena tool. 4 teams will be selected based on their professional design approach to key topics that concern Rohan and Libeň Island, such as sustainability, urban planning, landscape architecture and others. The aim of Prague is to gain a long-term partner for the development of the area and its management. The teams will be selected by an eleven-member committee of 5 dependent and 6 independent experts from different professions; foreign representatives will be represented by environmental scientist Fabio Masi and landscape architect Antje Stokman. Experts in social issues, gentrification, biodiversity, water management and other fields will also be invited. The estimated price of the final contract, which will include not only the completion of the landscape proposal and concept plan, but mainly the project documentation for the implementation of Maniny Park, is around CZK 45 million (1.85 million EUR); the exact tasks and final amount will be specified by the teams during the competitive dialogue. The competitive dialogue procedure will take approximately 14 months, with the winner to be announced in June 2023. An introductory conference, which will also be open to the general public, and workshops will take place in Prague in September of this year.

More information about the competitive dialogue and the project can be found on the website.

The application form for participation in the competitive dialogue procedure is available on Tender Arena at this link.